ANALEX specializes in developing intelligence, systems engineering and biodefense solutions in support of our nation’s security. Analex focuses on developing innovative technical solutions for the intelligence community, analyzing and supporting defense systems, designing, developing and testing aerospace systems and developing medical defenses and treatments for infectious agents used in biological warfare and terrorism. In Fiscal Year 2000 the company lost $745,000 on $19.9 million in revenue. In 2003 the company generated over $4.2 Million in EBIDTA on $66.1 Million in revenue. Hadron, Inc./Analex Corporation Timeline.

HADRON, INC. (OTC BB: HDRN) today announced that it has received $877,500 in equity capital from a group of investors led by Jon M. Stout, who has been named to the position of President and Chief Executive Officer. The investment group, which also included investment banker J. Richard Knop and John D. Sanders, financial advisor and a member of the Company’s Board of Directors, purchased 2,250,000 units, each consisting of one share of common stock and a warrant to purchase 0.9 shares of common stock, at $0.39 per unit. The five-year warrants are exercisable at $0.72 per share.

HADRON, INC. (OTC BB: HDRN) today announced financial results for its fiscal year 2000 fourth quarter, ended June 30, 2000. The Company reported operating income of $262,000 and net income of $204,000 ($0.03 net income per share) versus an operating loss of $179,000 and a net loss of $156,000 (an $0.08 net loss per share) for the fourth quarter of fiscal 1999. Hadron’s earnings before interest, taxes, depreciation and amortization (EBITDA) for the fourth quarter were $404,000. The Company’s profitability was achieved through a combination of controlling overhead costs while increasing the productivity of the Company’s technical and professional staff.

For the fiscal year ended June 30, 2000, Hadron reported revenues of $19.9 million, an operating loss of $421,000 and a net loss of $745,000 (a $0.23 net loss per share) versus revenues of $20.3 million, operating income of $63,000 and net income of $34,000 ($0.01 net income per share) for the prior fiscal year. The Company’s operating and net losses incurred during the first three quarters of fiscal year 2000 resulted primarily from loss of billable staff due to the hiring of certain of the Company’s technical employees by a major customer; goodwill amortization and interest expenses associated with acquisitions; and investments in new business initiatives in the area of biological weapons defense. The Company’s EBITDA for the fiscal year ended June 30, 2000 was $58,000.

HADRON, INC. (OTC BB: HDRN) today announced the financial results for the first quarter of its fiscal year 2001, ended September 30, 2000. The Company reported an operating profit of $136,000 and net income of $63,000 ($0.01 net income per share) versus an operating loss of $358,000 and a net loss of $451,000 (an $0.18 net loss per share) for the first quarter of fiscal 2000. Hadron’s earnings before interest, taxes, depreciation and amortization (EBITDA) for the first quarter were $246,000. The Company’s profitability was achieved through aggressive cost reductions combined with increased productivity of the Company’s technical and professional staff.

HADRON, INC. (OTC BB: HDRN) today announced it has signed an agreement to acquire Analex Corporation, a provider of high-tech professional services principally to the U.S. government. Founded in 1981, Analex is a privately held engineering and program management firm whose principal customers are NASA and the U.S. intelligence community. Analex has won numerous awards for the design, development, analysis, and testing of products and systems for the aerospace, information technology, high-tech manufacturing, telecommunications, and medical industries. Analex has more than 300 employees and offices in Cleveland, Ohio; Denver, Colorado; Phoenix, Arizona; and at Kennedy Space Center in Florida. Analex’s 2000 revenues exceeded $25 million. The consolidated company will have 450 employees and 2001 revenues of approximately $45 million.

Consideration for the transaction consisted of $6.5 million in cash, 3.6 million shares of Hadron restricted common stock and assumption of certain debts. To finance the transaction, Hadron negotiated a new senior credit facility with Bank of America and concluded a private equity placement. The transaction is expected to be finalized within two weeks.

For the first quarter of 2002, Hadron reported revenues of $13 million, compared to revenues of $4.2 million for the comparable period of the prior year. The increase is primarily due to revenues of $8.3 million generated by the Company’s Aerospace Group, formerly Analex Corporation, combined with increased revenues from biodefense contracts.

HADRON, INC. (OTC BB: HDRN) today announced that its wholly-owned subsidiary, Analex Corporation, has been awarded the Expendable Launch Vehicle Integrated Support (ELVIS) contract by The National Aeronautics and Space Administration (NASA). The total value of the ELVIS contract is $163.7 million over a period of nine years and four months. The ELVIS contract award is expected to increase Hadron’s employee base to more than 550, and increase the Company’s revenues by more than $17 million per year over the course of the contract. Other members of Analex Corporation’s ELVIS team are SAIC, Swales Engineering and a.i. solutions.

ANALEX CORPORATION (OTC Electronic Bulletin Board: ANLX) today announced that its common stock has been approved for trading on the American Stock Exchange (Amex). The stock is expected to start trading on the Amex in early March 2003.

ANALEX CORPORATION (Amex: NLX) today reported first quarter 2003 revenue of $16.6 million, a 28% increase over the prior year. For the quarter ended March 31, 2003, Analex’s net income of $735,400 represents an 86% increase compared to the prior year. The growth in revenue resulted primarily from the company’s Expendable Launch Vehicle Integrated Support (ELVIS) contract with NASA and the general growth of revenues in its Homeland Security Group.

Operating profit for the first quarter as measured by earnings before interest and taxes (EBIT), was $1.1 million, an increase of more than 69% over 2002 first quarter EBIT of $673,100. This represents EBIT margins of 6.9% compared to 5.2% a year earlier. The EBIT increases were attributable to increased operating margins at each of Analex’s three operating units. Earnings before interest, taxes, depreciation, and amortization (EBITDA) rose 65%, from $768,000 in first quarter 2002 to $1.3 million this year, with EBITDA margins rising from 5.9% to 7.6%.

ANALEX CORPORATION (Amex: NLX) today announced that its stockholders approved a $25 million investment by Pequot Ventures, the private equity arm of Pequot Capital Management, Inc., and also voted to approve an amendment to the Company’s certificate of incorporation to increase its authorized capital stock.

As previously announced and described in the Company’s proxy materials, Pequot purchased $15 million of convertible preferred stock, the proceeds of which are intended to provide Analex with funds to support future acquisitions, as well as $10 million aggregate principal amount of convertible secured subordinated promissory notes from Analex, the proceeds of which were used by Analex primarily to repurchase the equity holdings of Analex Chairman Jon Stout, his family members, and certain entities controlled by Mr. Stout and his family. 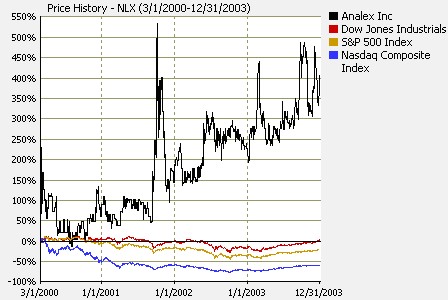